Presentation of the museum 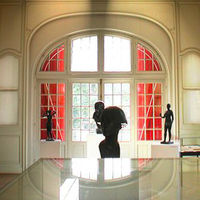 A Museum of Fine Arts in the Basque Country dedicated to G. Cl. Of Swiecinski

The museum of Guéthary was created on the ground floor of a splendid, early 20th century, neo-Basque house, the Saraleguinea villa, in the fifties, to house the donation of the sculptor Georges Clément de Swiecinski. These funds, which can be seen since 1985, include sculptures, ceramics and numerous drawings. The Saraleguinea villa stands in the heart of a magnificent and charming park, with sculptures by Claude Viseux, Dominique André and mosaics by Michel Duboscq.

Roman remains of the 1st century on the Basque coast

In 1984, some Roman remains were discovered in Guéthary station and subsequent excavations revealed the existence of a salting factory dating from the Roman Empire. The archaeological finds of the museum include specifically an exceptional funerary epitaph, unique in the south of Aquitaine.

The museum's collections also include original editions and objects belonging to Paul-Jean Toulet, as well as part of the correspondence of the Bearnaise poet who lived in Guéthary during the last years of his life.

Stories of a Basque village

The museum also offers, through the work of G. Cl. De Swiecinski, a walk through the « stories of Guéthary » , stories of men and traditions which have shaped this village, a village of fishermen and farmers transformed thanks to the sea Baths, into an elegant and attractive spa resort.

Contemporary Art in the Basque Country

Finally, since 1985, interested in supporting the artists of its time, the museum of Guéthary organizes exhibitions of contemporary art, painting, sculpture and photography from May to October.

Entrance  : 2 €
Children under 26 and Friends of the Museum: free
Groups (minimum 10 people): 1 €
Free admission on the third Saturday of the month

By the entrance of the condominium Saraleguinea, parking on the pediment of the museum.
A ramp allows access to the main hall