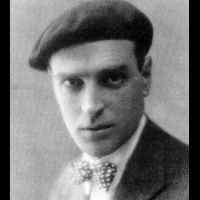 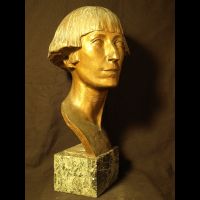 Costume and modeler, but also ceramist and designer, Swiecinski fits into the current neo-Mannerist figurative sculpture from the early twentieth century. Self-taught, always looking spirit, he stands by his technique, his contemporaries and Despiau Wlérick and refuses expressionism pronounced Rodin and the avant-garde movements of the time. His sources of inspiration are diverse but always associate natural material.

Swiecinski was a follower of direct carving, carving out of the block, seeking contact with matter. Direct carving, unlike modeling naturally leads to a simplification of the attitudes and the artist returns to the truth of the matter: "It is not from without, but from within comes the genius (...) to do. Block out a living figure, without sketch, model, or prior model, it is necessary to have the gift of insight. Here is a block extracted from the quarry and has no specific geometric shape. I goes around, I examine all angles and, suddenly, it seems to me the image conceived by my mind. This image is now part of the block that my second sight penetrates ... ".

Tailor, he was also a great modeler, clay pieces are very present in his work. The earth work also served him sometimes sketches which it referred to perform works in bronze or marble. Bronzes multiply that by treating all his favorite themes in Valsuani, his authorized depth.

Excellent portraitist, he had the gift to capture the appearance of his model. Incidentally, the bust of Paul-Jean Toulet, F. Jammes says of him: "He has shaped the poet bust least by using motionless sittings as acute and constant observation of the model acting, reading, writing or speaking, what he sought, that is the secret of the soul and the focus of life ... "

His first pottery works date back to 1912, when he made his first firings in the kiln built Villa Brune in Montparnasse. This is probably, once installed in the Basque country in 1923 he turned towards ceramics, encouraged by sculptor and ceramist Landes Edouard Cazaux.

There are some thirty works in the museum of Guéthary. Some of them have a simple form, jugs, bowls, vases, vases and incense burners, turned the turn with a reddish brown earth trend, others small bottles perfume dishes acute aspects, mounted the plate in a beautiful land salmon clearer, fine grain as a land sandstone, reveal a more art deco inspiration.

His brother Joseph taught GC. Swiecinski of the basics of drawing before he left for Paris. This mainly used pencil or ink watercolor heightened it. We find as always the themes dear to the artist, sacred art, Greek and Roman mythology, the East, and especially women.

Sacred art which has an important place in his work, is inspired with sobriety of medieval and Byzantine traditions. Repeatedly approached by religious institutions, it will actively participate in the renewal of the sacred art of the interwar period.

Mythology is a commonly treated theme with items such as: "the battle of Hercules and the Centaur", "Amazons", "Leda and the Swan".
The influence of the East and Asia is also evident as soon debut. He likes to talk Hindu thought through works such as Ramayana or polychrome reliefs on the loves of Rama and Sita. It also evokes the Japanese tradition through the busts of his Japanese that emit grace and mystery.
Later favorite subject, GC Swiecinski dedicated to the representation of the female body. It depicts a woman in its fullness, lascivious and fulfilled, kindergarten ... he sanctifies his gestures and his simplest attitudes, wanting to at once radiant and natural. 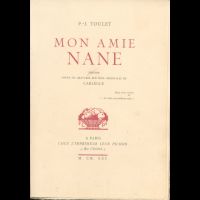 Born in Pau in 1867, died in Guéthary in 1920, John Paul TOULET Parisian dandy, however, very attached to his native Béarn and the Basque Country, now finds the place it deserves in the French literature of the twenty-first sciècle.

His poetry collection the most famous, the "Contrerimes" (1921) hides under a preciousness and a charming fantasy, severity and often poignant bitterness.

Novelist John Paul TOULET published "MONSIEUR PUBLIC RIGHTS RUSP" and the ironic and tender vein of his poems, "MY GIRLFRIEND NANE" and "YOUNG GIRL GREEN". Thus, based in Guéthary in the cemetery "where we see the sea", the one that a friend and biographer was nicknamed "Letters Gentleman".